Watch the 'Who We Are' video
Q 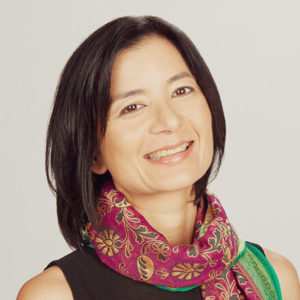 A thoughtful leader and an advocate for the world’s most vulnerable, Reeta has worked tirelessly to build a foundation that is collaborative and known for its lasting impact.

Today, the Mastercard Foundation is one of the largest private foundations in the world. Its vision is a world where everyone has the opportunity to learn and prosper. Under Reeta’s leadership, the Foundation has focused its work on Africa and committed more than US$4.4 billion to advance education and financial inclusion. Its programs have improved the lives of more than 51 million people and their families.

A strong believer in listening, Reeta can often be found in the field, working directly with the people whom the Foundation’s programs serve.

Reeta’s childhood growing up in Malaysia helped her to develop her capacity to listen and the empathy with which she approaches the Foundation’s work. Reeta was a beneficiary of scholarships that allowed her to complete her education and mentors continue to support her growth as a leader.

Prior to joining the Foundation, Reeta was the Divisional Vice President of Global Citizenship and Policy at Abbott and was Vice President of the Abbott Fund, its corporate foundation. She led Abbott’s public-private initiatives related to HIV/AIDS in Africa and a range of global health programs. Before Abbott, Reeta held a number of leadership positions at Bristol-Myers Squibb, working on global health policy issues. Prior to joining the private sector, she worked at the United Nations.

She holds seven Honorary Doctorate degrees from institutions including EARTH University, McGill University, University of Toronto, American University of Beirut, and Kwame Nkrumah University of Science and Technology (KNUST). She has received several awards, including the Distinguished Achievement Award from Tufts University, the C3 Women Empowerment Achievement Award, the Class of 1947 Memorial Award from The Fletcher School of Law and Diplomacy at Tufts University, and the Women of Distinction Award from YWCA Toronto. During Reeta’s tenure, the Foundation has also been recognized with a number of awards, including the Canadian Council for the Advancement of Education’s Friend of Education Award, the Global Education Award of the World Affairs Council, the Women’s Leadership Award from Opportunity International, and the Global Foundation for Peace Award from International House at Berkeley.