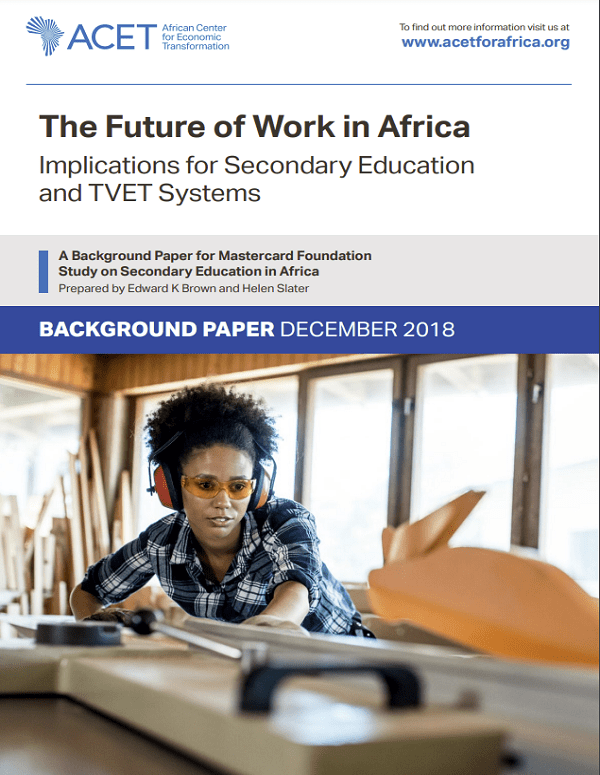 One-fifth of the global population under the age of 25 now resides in Sub-Saharan Africa (SSA), the world’s youngest region, which is growing at a rapid rate. The region’s working age population is expected to reach 600 million in 2030, with a youth share of 37 percent—bigger than that in China. With the right education and training, coupled with national economic strategies and policies that provide the right environment for rapid economic growth and creation of employment opportunities, Africa’s large and fast-growing youth population could be a great asset for development and a comparative advantage in world markets. However, Africa already faces high and rising unemployment rates, with youth particularly vulnerable. Across Africa, youth unemployment (10.9 percent) is essentially double that of adults (5.6 percent).

Governments face significant challenges in realising the demographic dividend. In most African countries, over 80 percent of workers are in the informal sector, either in traditional agriculture or in urban, informal economic activities, where under-employment and low-earnings are pervasive. Increasingly, the face of the unemployed or informal sector worker in Africa is no longer the uneducated man or woman but a secondary or tertiary school graduate. In Ghana, for example, only 10 percent of the 200,000 who enter the labour force each year find formal sector jobs. Similar trends can be found across SSA.

There are two primary reasons for this trend. First, formal sector job creation has not kept pace with the increased number of secondary and tertiary school graduates—a rise fuelled by the population surge and rapidly improved access to education. And second, where job demand in the formal sector does exist, necessary skills and training do not, due either to the poor access and quality of education or to the specialisation of degrees in subject areas (e.g., arts and humanities) outside those that employers demand (e.g., science, technology and mathematics, or STEM). This latter factor is particularly problematic since technology is not staying the same. Indeed, what is often called the 4th Industrial Revolution—encompassing the rapid evolution of robotics, artificial intelligence, 3-D printing (or additive manufacturing technology) and the “internet-ofthings”— is fundamentally disrupting manufacturing technology, with significant implications for the nature and growth of jobs. For the last two decades, African countries have focused on reducing costs, improving investment climates and attracting labour-intensive manufacturing to capitalise on an abundance of labour, grow fast and provide productive jobs. Now, with the disruptive technological changes and its impacts on global production and trade, the way forward is not so clear.

Additionally, economic transformation has been slow, which has hampered growth in productive jobs. A large share of the growth, outside the dominant agricultural sector in the past few decades, has been in household enterprises—unincorporated, non-farm businesses owned by individuals—rather than the modern, industrial, or services enterprises that would be expected under transformation. The employment situation also has a disproportionately negative impact on women. Almost 90 percent of women work in informal employment. Gender differences tend to be more pronounced in countries with high levels of youth unemployment, as well. Employment projections to 2030 suggest the overall picture is not going to change soon. Agriculture is expected to continue to dominate in the low and lower middle-income economies, providing about two-thirds of total jobs, while the services sector will continue to dominate in the upper middle-income economies. Perhaps most troubling, the manufacturing sector is projected to provide only 6.5 percent of total employment across all income categories, raising additional questions about manufacturing-led industrialisation in Africa. Therefore, across the continent, discussion of the future of work and employment must be grounded in current realities, which include “jobless growth”, deficits in infrastructure and skills and the application of modern technology. What preparation for the youth is needed for the new world order?