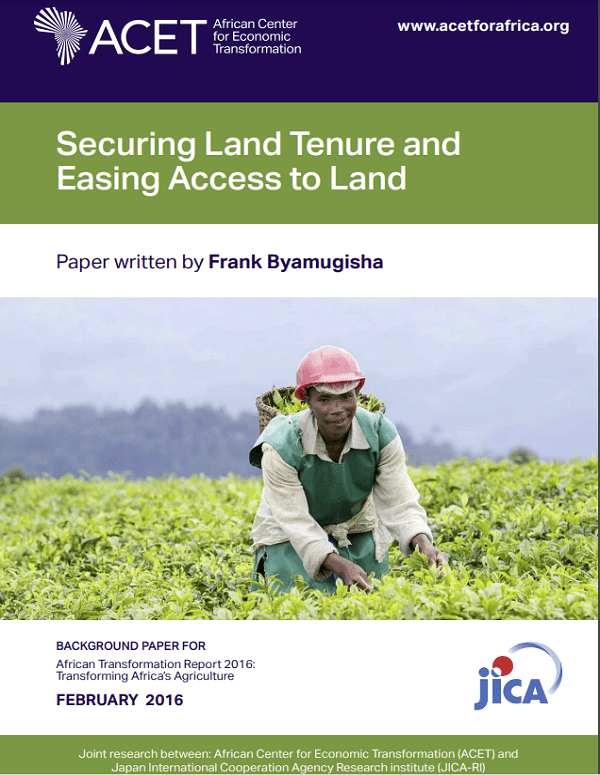 This chapter first reviews the state of land tenure and administration in Africa and identifies nine (9) factors that could explain the problems faced by Africa’s land sector.

The chapter argues that securing land tenure is necessary in both land-abundant and land-constrained areas to promote investment and productivity through land expansion and agricultural intensification, respectively. In the land-abundant areas, most of the land is under customary tenure and held in common; the immediate need is delimitation or demarcation of boundaries and registration of community land which can be more cost-effective and appropriate than registration of individually owned land. On the other hand, land-constrained and densely populated areas require community-based systematic land titling to register individual rights. Even after registering land, enhanced land tenure security will require the strengthening of formal and informal land dispute resolution institutions to resolve land disputes fast and cheaply if and when they arise in both land-abundant and land-constrained areas.  Many African countries have already made legal provisions recognizing customary tenure and communal land rights although implementation in terms of organizing local communities into legal entities and registering their land rights has been progressing slowly.

The following three key lessons learnt from the African experience are highlighted.

(1) Demarcation of communal land boundaries is not merely a technical surveying exercise, but a process that requires time and financial resources to resolve disputes and agree on boundaries before fieldwork begins;

(2) Even without a legal requirement for a detailed survey of boundaries, registration of communal lands can be a very slow process if community owners of land are not clearly defined, such as established traditional authorities (as in Ghana) or statutory ones (as in Tanzania), and if new formal entities have to be developed as in Mozambique; and

(3) Registration of communal land needs to be followed up with resources to plan for communal and individual land use within the community and to delineate common-property resources such as grazing land.

The chapter notes that a recent project to watch which seems to be putting all the three lessons to work is ProSAVANA in Mozambique. The project supports: (a) organizing local communities into legal entities and registering their community land rights through community DUATs; (b) registering land rights for smallholders within the communities through an estimated 660,000 individual DUATs; and (c) institutionalizing government’s district land use plans in all the 19 districts.

The chapter argues that at least three sets of reforms are needed to improve land markets so as to enhance productivity and transform Africa’s agriculture. The first is to increase land tenure security. Studies conducted in Ethiopia found that land certification programs in 1998-99 and 2003-05 resulted in higher rental market activities. The second is to avoid or eliminate controls and restrictions on land markets. Experience in Uganda and Ethiopia show that where and when there were less restrictions on land rental markets, land rental activities went up and eased land access for the land poor and impacted significantly on productivity at least in Ethiopia.  The third is to scale up the integration of customary tenure into statutory law and to develop representative formal institutions to strengthen land tenure security and to enable formal land transaction to be conducted with non-community members, building on the experiences of at least ten African countries and others outside Africa such as in Mexico. African countries have to scale up efforts to organize traditional customary institutions into legal entities, as Mozambique, Uganda and Liberia have been piloting, to enable them enter into formal contracts of land transactions with non-community members as has been done successfully with the ejidos in Mexico.

While strengthening land tenure security is key to achieving efficient land allocation among farmers, additional interventions must be made to overcome lack of and imperfections in land markets so as to make land easily accessible to all farming households including the land-poor, women and the youth to maximize their contribution to agricultural transformation. These Interventions must involve strengthening land markets, allocating unused agricultural state land to investors and the land-poor, redistributing to the land-poor underused private land using market-oriented approaches, and eliminating the gap between men and women in accessing land.  In addition, protecting land rights of smallholders and communities is critical to ensuring that the investments are economically, socially and environmentally viable.

The challenges to reforming agricultural land tenure and land administration include:

Major emerging opportunities to reforming agricultural land tenure include (i) better commodity prices and increased foreign direct investment with potential to increase agricultural yields and markets thereby raising returns to investing in reforming land tenure and land administration; (ii) availability of new technologies such as satellite and ICT with potential to reduce costs of land administration; (iii) basic land laws are in place in many African countries recognizing customary land rights and gender equality which are key to improving land tenure security and equitable access to land; and (iv) the existence of  important global and regional initiatives in place, including the Voluntary Guidelines on Responsible Tenure of Land and the African Union’s Framework and Guidelines for Land Policy, which should make it easier for African countries to design and implement land reforms.