Integrated rural development in Africa: Back to the future? 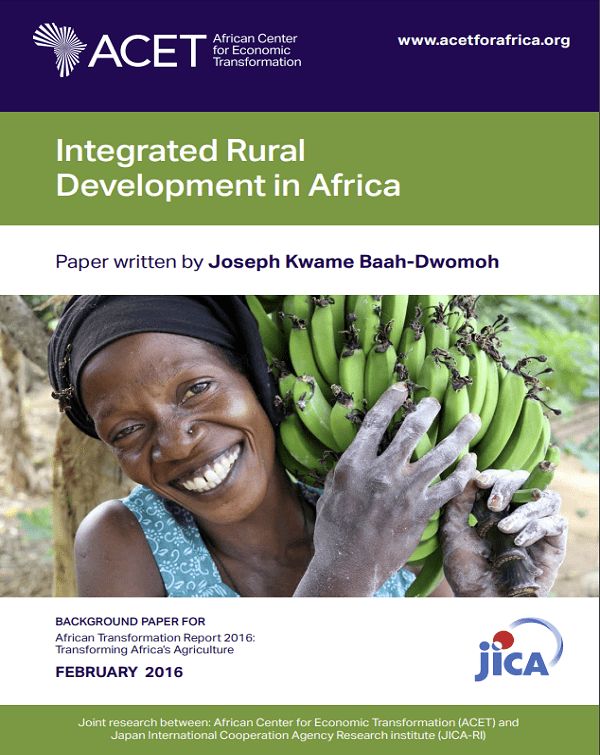 This paper reviews the general approach followed by governments and donors to support African agriculture and rural development over the last several decades. It focuses in particular on evaluating the integrated rural development (IRD) approach that was used in the decades of the 1970s and 1980s.

The paper then looks at the difficulties that the approach encountered and what lessons came out of the extensive evaluation of projects using the IRD approach. The paper further discusses the different approaches that have evolved since around 1990 to support African agriculture and rural development including how the lessons learned from the implementation of the IRDs have been incorporated in the design and implementation of these new rural development programs.  Finally it tries to answer the question of whether there may be better approaches to designing programs and projects to support agricultural growth and development than the IRD approach or whether this approach needs to be revisited as a means of putting agriculture at the center of processes to transform rural Africa and promote growth and development of the rural sector.

Starting in the 1950s, the key ideas informing approaches to rural development revolved around the need to modernize rural areas with the idea that the traditional small scale subsistence sector had little potential for improved productivity or growth.

In the 1960s there were high expectations of the promise of technology with a focus on technology transfer targeting large scale, input intensive agriculture based on packages of higher yielding hybrid seeds, fertilizers, pesticides, mechanization and post-harvest technologies, which came to be known as the Green Revolution in Asia.

In the decade of 1970s, development practitioners concluded that despite more than a decade of rapid growth in underdeveloped countries, there had been of little or no benefit to most of the poor who were being bypassed. This resulted in the introduction of several IRD projects, which the World Bank vigorously supported. Sadly, many of these of projects failed due to serious institutional weaknesses, and progress was slowest where most needed—in Sub-Saharan Africa.

This paper highlights the point that the general expectation was that through IRD projects governments could initiate a process that would lead to sustainable improvements in the quality of life for rural people, especially the poor, and would help transform undeveloped rural settings into cohesive communities with profitable productive opportunities where members enjoyed basic public and social services.  Under IRD, a national program of rural development should include a mix of activities, including projects to raise agricultural output, create new employment, improve health and education, expand communications, and improve housing.

An assessment of the IRD indicate that some 60 percent of the completed projects had satisfactory results. There were, however, variations in satisfactory rates according to project type and/or subsector. This was due to several reasons including (1) design issues, (2) unfavorable macro-economic and/or political environments, (3) rigidities and staffing of development agencies for IRD, and (4) misunderstanding of farming systems and technological packages.

It is evident from the paper that the IRD approach of the 1970s was well-intended, given the alarming situation of the absolute poor in the developing world as described by the World Bank president in 1973. While there were issues about the design and implementation of the IRD projects, there were some successes and the projects attempted to respond to a real need to address poverty in rural areas. More importantly, the decades of implementation covering several countries and projects involved have afforded many lessons learned, offering policymakers and government officials better tools and methods to design projects with a more realistic, seasoned approach to reach the poor. In addition, the lessons from the past suggest that there is much to be gained using a coordinated approach to rural development. While we may not necessarily go back to the integrated rural development model of the 1970s, lessons learned could inform the design and implementation of coordinated support to the agricultural sector. In particular, these lessons could be help in the sector-wide approach and also the emerging value-chain approach to agricultural development.

Share On Facebook
Share On Twitter
Share On Whatsapp
Share Via Email
Copy URL
Also in ATR2 Background Reports
The African Transformation Report 2017 sets out a bold new agenda for African development, powered by a revolution in agriculture. The report unveils a radical program of reforms to trigger economic transformation far beyond the farming industry. The report highlights the immense contributions that agriculture can make and offers practical examples, lessons and recommendations. Full report: African Transformation Report 2017: Agriculture Powering Africa's Transformation
View All