Watch the 'Who We Are' video
Q

Africa’s Got Work to Do: Employment: Prospects in the New Century 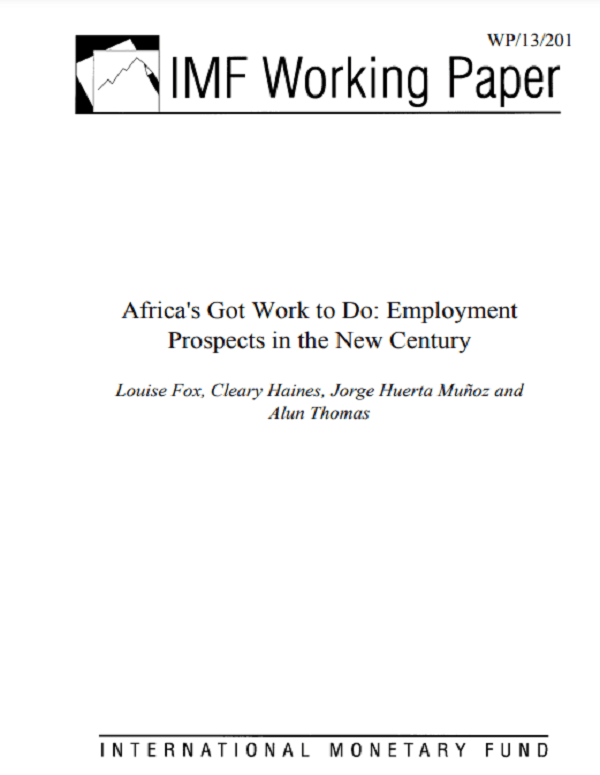 Employment outcomes are among the most important variables used by economists to link the size and structure of economic growth to the welfare of households. This is because experience has shown that growth in output alone is not enough to improve the welfare of the population. It is widely agreed that transformation of the economy from a fundamentally agrarian, basically subsistence one to an urbanized, integrated, enterprise dominated one is the essence of economic development.

Dating back to the initial analysis of Lewis, 1954, the progress of this transition has been measured in both output and employment space. Sub-Saharan Africa1 (SSA) has just completed one of its best decades of growth. Transformation of output is occurring as agriculture, the lowest productivity sector, has declined as a share of GDP across the continent (despite increases in agricultural commodity prices which pushed up the share in current prices). The share of higher productivity sectors has increased as a share of GDP. Yet poverty rates have remained stubbornly high. Dissatisfaction with economic outcomes is widespread (Afrobarometer, 2013). Is this because employment has not transformed?

It is difficult to answer this question because employment data by country and sector of activity is scarce. A cursory review of employment data for low income sub-Saharan African countries in the International Labor Organization (ILO) Key Indicators of the Labor Market (KILM) data base shows that almost half of the countries have not published any data on the structure of employment between 2000 and 2010. Much of the data published is over five years old. In some countries, the data is not collected regularly, while in others, the data is not publically available. In many cases where the data is available, methodological problems result in data that is not comparable over time within countries or at one point in time between countries.2 Little is known about the current structure of employment in sub-Saharan Africa or the trends in employment creation. This makes it hard to assess the prospects for employment creation in the future, despite the political, social and economic importance of the topic.

As part of background work for the IMF Africa Regional Economic Outlook (IMF, 2012) and the World Bank Africa Regional Report on Youth Employment (Filmer, Fox, and others, 2013) estimates of the current and future structure of employment in sub-Saharan Africa were produced. As much country data as possible was collected and, using a special methodology designed to produce comparable employment and unemployment estimates by country, baseline results for 2005 were produced. Next, an elasticity-type model was developed to estimate how the baseline might have changed between 2005–10 based on economic growth and demographic outcomes, as well as any employment data available for sub-Saharan African countries. Using country level economic and demographic forecasts for 2010–20, the model was used to forecast the expected number of new jobs which would be created over this period and the resulting regional employment structure by country profile and employment type. Using moderately optimistic and very optimistic assumptions, it showed how the structure could be expected to change by 2020.

These results are the first regional estimates of the structure of employment after Africa’s longest economic expansion in 50 years. They show that agriculture still employs the majority of the labor force, despite only accounting for about 13 percent of GDP in 2010. In part this is because the employment transformation always lags the output transformation (Timmer, 1988). But the shift is slower in sub-Saharan Africa because the demographic transition is also lagging, so the labor force is still large and growing rapidly—much faster than in low and lower-middle-income countries in Asia, for example. Disaggregating the regional trend by country type, it is shown that the type of growth affects the employment opportunities created. While the share of employment in agriculture has declined in both resource rich and non-resource rich low and middle income countries, in resource rich countries the private enterprise sector has not created much new employment. Resource rent income has instead created public sector wage jobs.

Sub-Saharan Africa’s projected rapid labor force growth, combined with a low baseline private sector wage employment, means that even if sub-Saharan Africa realizes another decade of growth as good or even better than the past one, employment transformation will proceed slowly. Over the decade 2010–20, the absolute number of people employed in agriculture is expected to continue to grow, not shrink, even as the share employed outside the agricultural sector continues to rise. Equally important, because it is so small relative to the size of the labor force, even under an optimistic scenario, the share of labor force employed in private firms is not expected to rise substantially. These results have important implications for employment policies in these countries, as they show the importance of a balanced employment policy. Governments need to undertake the measures required to attract private enterprises that provide wage employment for lots of people, but they also need to focus on improving productivity in the traditional sectors as these will have to absorb the majority of the labor force. In particular, they should not discourage the household enterprise sector, despite its informality.

Transforming and Building Resilient Economies in Africa: Resetting Priorities for the Policy Agenda in the post-COVID-19 Era