Enhancing domestic resource mobilization: What are the real obstacles?

At the Center for Global Development, we recently initiated a project to develop more effective and equitable strategies for domestic resource mobilization in low-income countries in sub-Saharan Africa (SSA). The impetus for the project is the Addis Ababa Action Agenda for financing development, which calls on developing countries to step up their efforts to collect more taxes domestically to achieve the Sustainable Development Goals (SDGs). The CGD project envisions many outputs over the next two years, but a central one is organizing a roundtable of finance ministers every six months to discuss the impediments—political and structural—to raising domestic resources. The first such roundtable was held the week of the IMF/World Bank Spring Meetings in Washington DC. In this blog post, we summarize the key issues that emerged.

The challenge of mobilizing domestic taxes should be considered against the funds required to achieve the SDGs. According to the IMF, the funds required in five SDG areas (education, health, roads, electricity, water and sanitation) will grow to 15 percent of gross domestic product (GDP) by 2030, on average across low-income countries. But given its development level, most of SSA will require more than an average of 15 percent of GDP.

Where are SSA countries on mobilizing taxes domestically?

On average, the tax-to-GDP ratio in SSA has risen by 2 to 3 percentage points of GDP in the past two decades, depending on the data source (see figure below). This is comparable to progress in Asia during the same period. Furthermore, since 2000, resource-rich countries in SSA have been raising tax revenues from non-resource activities by almost 4 additional percentage points of GDP, suggesting that in the future their fiscal policy will be more insulated from the vagaries of commodity prices. That said, there are 10 countries in SSA where the tax-to-GDP ratio is below 15 percent. This level of tax capacity is viewed as essential for the state to become viable and to ensure sustainable growth. These countries, which include many fragile states, pose a particular challenge for policymakers. 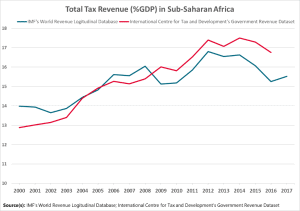 Higher tax collections in SSA have been driven primarily by rising revenues from value-added tax (VAT), despite lower revenues from international trade taxes. On average, VAT now constitutes around one-third of total tax collections in SSA. Going forward, through improvements in tax compliance and tax design, the potential for raising revenues from VAT is substantial. Revenues from corporate income taxes in SSA have held up at around 3 percentage points of GDP. These revenues, however, are less than what countries in SSA can potentially mobilize because of tax competition and profit shifting by multinational companies. According to the IMF, developing countries collect $200 billion less from corporate taxes every year because of these activities.

A key question is whether the increased reliance on VAT causes the overall tax system to become regressive to the detriment of the poor. Unlike in advanced economies, the ratio of direct tax revenues to indirect tax revenues in SSA has remained broadly unchanged; in fact, it has increased modestly. While revenues from progressive income taxes have increased to some extent, receipts from property taxes have not changed during the last two decades despite rapid urbanization and increases in property prices. The former is associated with worsening income distribution in SSA. Redistribution through tax revenues, however, is severely impaired by large-scale inefficiencies in social and investment programs.

What do ministers see as the problem?

The first meeting of the ministers’ roundtable focused on the political economy of taxation. While there is room for improvements in the techniques of tax administration, the fundamental problems in revenue mobilization, across a wide variety of sources, are rooted in inequitable power structures. These power structures create widespread perceptions of unfairness, corruption, and a lack of transparency, which compromise compliance and enforcement mechanisms.

Essentially, the social contract needed to make any revenue effort is broken. The general populous is unclear about the benefits of paying taxes and is skeptical about their social duty to contribute to a revenue system where they see large and powerful players—be they individuals or corporations—opting out, sometimes because of tax exemptions. The economically powerful in a country can keep the tax authorities at bay. Property tax revenues suffer from inadequate records as to who holds what property and property valuations remain artificially low. These phenomena stem both from inadequate resources available for valuation and political incentives to postpone or falsify them. Multinational corporations use a complex web of international tax laws to skirt paying taxes in low-income countries; they also exploit asymmetries in accounting capacity between them and local tax authorities to impede audits and call on powerful political networks to “protect their investments.”

These political forces exempting the rich and powerful compound the already difficult technical problems of bringing large, informal sectors into the tax net. The “tax culture” that many advanced societies rely on, in part to ensure regular tax payments across smaller taxpayers, does not exist. This gap opens a vicious circle of distrust in the government: low resource mobilization means services are not provided regularly and efficiently, and the lack of service provision discourages tax payments.

Is there a solution?

There are a variety of solutions to the problem of domestic resource mobilization. They include increasing resources for audits; establishing well-resourced large taxpayer units; simplifying tax processes to lessen the administrative burden; using digital technologies for better record-keeping, monitoring, and auditing; increasing transparency in granting tax exemptions; and harmonizing tax policies across sectors. These are all well-known recommendations proposed by providers of technical assistance to low-income countries. All can potentially assist tax authorities in mobilizing more revenue.

Implementing these measures, however, costs money and takes time. Difficult choices will have to be made—tax authorities are victims of low tax revenues just as other government service providers. What advice can ministers give each other to craft effective strategies for inculcating a tax culture that will provide the domestic resources needed for the pressing human and physical infrastructure needs of their countries? That’s the subject of the next ministers’ roundtable, to be held in October 2019.

Sanjeev Gupta is a Senior Fellow at the African Center for Economic Transformation and Mark Plant is Director of Development Finance and Senior Policy Fellow at CGD.

This blog was first published by the Center for Global Development.

The Business of Transformation: A Conversation with Charles Odoom

Beyond Brussels and Addis Ababa: How to make the AU-EU partnership work

Industrial Innovation: the next frontier for African progress

The Imperative of Digital Infrastructure for Africa’s Future

A Window of Opportunity for Digital Innovation