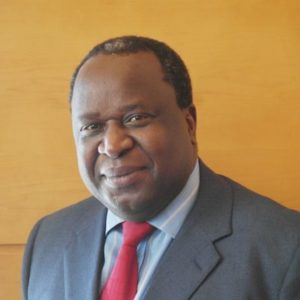 Mr. Tito T. Mboweni is the Chairman of the Board of ACET and Minister of Finance, South Africa. Mr. Mboweni brings a wealth of leadership experience from business, government, and academia.

A trailblazer in African ownership of Africa’s future, his credentials include ten years as the first black governor of the South African Reserve Bank and Minister of Labour in President Nelson Mandela’s cabinet, in which capacity he is credited with being the architect of South Africa’s post-apartheid labour legislation. He has also served as Chairman of AngloGold Ashanti Ltd, Chancellor of the University of North West, and has played various roles within the African National Congress.

Currently, he is an International Advisor to Goldman Sachs International and chairman of the following companies: Accelerate Property Fund, Nampak Limited, and SacOil Holdings Limited. He is also a non-executive director at Discovery Limited and a founding partner of Mboweni Brothers Investment Holdings.

Demonstrating his commitment to public service, Mr. Mboweni is a trustee and Chairman of the Fundraising Committee of the Nelson Mandela Children’s Hospital, a member of the Council of Advisors of the Thabo Mbeki Foundation, and honorary professor at several South African universities. Mr. Mboweni is a BA graduate in politics and economics from the National University of Lesotho and holds a Master’s Degree from the University of East Anglia. He has been awarded multiple honorary doctorates from amongst others, the universities of Cape Town, Stellenbosch, KwaZulu-Natal, Johannesburg, and the University of East Anglia.