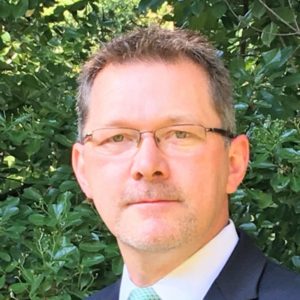 Rob Floyd served as an ACET Director and Senior Advisor from July 2017 to July 2021. In that role he supported ACET’s efforts to develop strategic partnerships, enhance its profile and deepen the ACET business model.

He led much of ACET’s work on infrastructure and investment, including the G20 Compact with Africa (CwA) and ACET’s program on infrastructure project cycles.  He also launched ACET’s first programs on innovation, technology and digitalization, including the continent’s first artificial intelligence challenge for regional infrastructure. Rob also led ACET’s work on blended finance, industrial innovation and COVID-19 response. During his time at ACET, Rob wrote more than 25 reports, policy briefs, peer reviews and blogs.

An economist and journalist by training, Rob joined ACET from the World Bank, where he has returned as a Director. He began his World Bank career in the Africa Region, serving as an economist in the office of the Vice President, and then as public sector specialist for Southern and Eastern Africa. He was Chief of Staff to two World Bank Presidents, James Wolfensohn and Paul Wolfowitz, and later oversaw the Bank’s $2 billion annual lending programs to Pakistan and Bangladesh as Country Coordinator, including serving as interim Country Director in Bangladesh in 2009-2010.

In 2010, Rob joined the World Bank Institute as Operations Manager and later was appointed as Director for Strategy and Operations. His last position at the World Bank was Director for Operations and Strategy for Finance in the office of the World Bank Managing Director and CFO. Prior to the Bank, Mr. Floyd worked for GIC Group, a global consulting firm, and Sandler, Travis and Rosenberg, LLC, a law firm specializing in international trade issues. As a journalist in the early 1990s, he covered agricultural issues from Switzerland, Thailand and Australia, and was the agriculture reporter at the Missourian.

Rob serves on the Development Committee of the Anacostia Watershed Society (AWS) and is a Global Advisor for Agromovil, an app-based platform to help get agriculture produce to market more efficiently. He studied at the University of Missouri, American University and George Mason University. He lives in University Park, Maryland with his wife.

Rob Floyd is focusing on these issues

Industrial Innovation: the next frontier for African progress

The Imperative of Digital Infrastructure for Africa’s Future