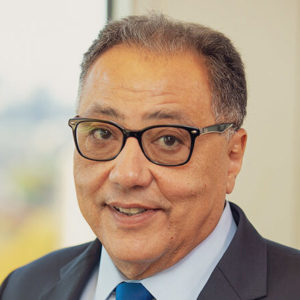 Hafez Ghanem, an Egyptian and French national, is the Former Regional Vice President for Eastern and Southern Africa. A development expert with over 30 years of experience, Dr. Ghanem leads relations with 26 countries, and oversees over 280 projects totaling more than $49 billion.

Prior to his appointment on July 1, 2020, Dr. Ghanem served as the Vice President for Africa. Under his leadership, the World Bank supported inclusive growth and poverty reduction by financing projects that boost human capital, support private sector development, raise agricultural productivity, improve access to infrastructure, build resilience to climate change, and promote regional integration. Intensifying assistance for fragile and conflict-affected states, promoting gender equality, and providing economic opportunities for youth were core to his vision for the Africa Region.

Dr. Ghanem also served as Vice President of the World Bank for the Middle East and North Africa from 2015 to 2018, overseeing the World Bank’s engagement with 20 countries. Leading up to this, he was a Senior Fellow at the Brookings Institution in the Global Economy and Development program leading the Arab economies project, focused on the impact of political transition on Arab economic development.

Between 2007 and 2012, he served as the Assistant Director-General at the Food and Agriculture Organization of the United Nations (FAO). He was responsible for the Economic and Social Development Department and the FAO’s analytical work on agricultural economics and food security, trade and markets, gender and equity, and statistics. In this role, he and his counterpart at the OECD coordinated the preparation of the International Organizations’ recommendations to the 2011 G20 meeting on how to respond to the global food crisis.  He also led the reforms of the Committee on World Food Security to make it more inclusive and responsive to country needs.

Dr. Ghanem began his career at the World Bank in 1983 as a Young Professional. Over the span of 24 years (1983-2007), he worked on Bank operations and initiatives in over 20 countries in Africa, Europe and Central Asia, Middle East and North Africa, and Southeast Asia. His previous positions at the World Bank include: Country Director for Nigeria where he led a multinational team of more than 100 professionals, managing the Bank’s loan portfolio of some $1.5 billion; Country Director for Madagascar, Comoros, Mauritius and Seychelles; and Sector Leader for Public Economics and Trade Policy in the Europe and Central Asia Region.

He has many publications in professional journals and was a member of the core team that produced the World Bank’s 1995 World Development Report.