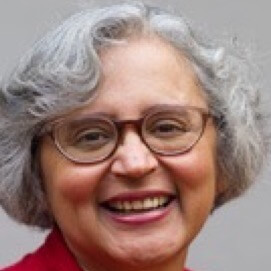 Cecilia Conrad is CEO of Lever for Change, a new nonprofit affiliate of the John D. and Catherine T. MacArthur Foundation, created to accelerate large-scale social change around the world. The organization develops and manages customized, open and transparent competitions that connect donors with bold solutions to global challenges, while strengthening the most highly rated ideas emerging from these competitions and catalyzing big investments through its Bold Solutions Network.

In addition to her role at Lever for Change, Dr. Conrad oversees the MacArthur Fellows and 100&Change, MacArthur’s competition for a $100 million grant to help solve a critical problem of our time. Before joining the Foundation in 2013, Conrad had a distinguished career as both a professor and an administrator at Pomona College in Claremont, CA and is currently Professor of Economics, Emerita at Pomona. She served as Associate Dean of the College (2004-2007), as Vice President for Academic Affairs and Dean of the College (2009-2012), and as Acting President (Fall 2012). From 2007-2009, she was interim Vice President and Dean of the Faculty at Scripps College.

Dr. Conrad received her B.A. degree from Wellesley College and her Ph.D. in economics from Stanford University.