Africa suffers from poor quality and expensive infrastructure services compared to other parts of the world. It is estimated that this constrains productivity by up to 40 percent and reduces the continent’s GDP by about 2 percent per year.

With the imminent enforcement of the African Continental Free Trade Area—which will be the largest single market in the world for goods and services, as well as the free movement of investments and people—the urgency for infrastructure development on the continent is even more compelling.

On top of this, Africa’s limited existing infrastructure is already being severely impacted by extreme events associated with climate change.

Impact of Climate Change on Infrastructure

According to a 2015 study by the World Bank and the UN Economic Commission for Africa (ECA) called Enhancing the Climate Resilience of Africa’s Infrastructure, some river basins could become wetter under certain scenarios of global emissions pathways, for example, the Orange River Basin and Congo River Basin, while others, such as the Zambezi River Basin, could become drier.

These impacts are already being witnessed across Africa. For example, hydropower production from the Kariba Dam on the Zambezi—which supplies most of the electricity consumed in Zimbabwe and Zambia—almost ceased in early 2016 when the volume of water in the reservoir dropped to about 12 percent of capacity. This ultimately resulted from the impact of climate change on the El Niño and La Niña events in 2015 and 2016. But many large-scale dam infrastructure projects will be developed on the continent over the next few decades to unleash Africa’s largely untapped hydropower potential.

A similar study on transport shows that climate change is likely to lead to a shortening in the rehabilitation life cycle of roads, which may entail steep increases in maintenance costs.

While the infrastructure and infrastructure services gap in Africa remains high, there is increasing activity and investment on the continent against a background of an ambitious long-term plan for closing Africa’s infrastructure gap, called the Programme for Infrastructure Development in Africa (PIDA), that African heads of state and government endorsed in 2012.

PIDA consists of over 400 projects, including 54 energy projects (hydropower plants and interconnectors) and 236 transport projects. These sectors are sensitive to the adverse impacts of climate change, such as droughts, heat waves, and more frequent and intense floods. The energy projects include 10 hydropower plants of over 22 gigawatts capacity, notably the Inga-3 and the Grand Ethiopian Renaissance Dam. The infrastructure projects identified in PIDA require investments in the order of $360 billion by 2040.

Figure 1: Infrastructure Financing Commitment in Africa in 2017 by Sector (by Percent) 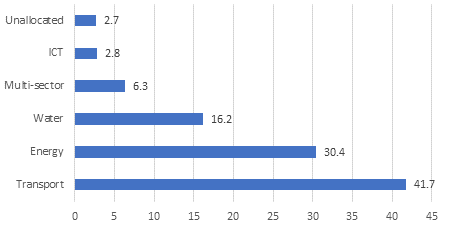 By contrast, the private sector accounted for just 2.8 percent.

Most of the investments were in transport (41.7 percent), energy (30.4 percent) and water (16.2 percent)—all sectors that are sensitive to the adverse impacts of climate change.

Figure 2: Sources of Infrastructure Financing Commitment in Africa in 2017 (by Percent) 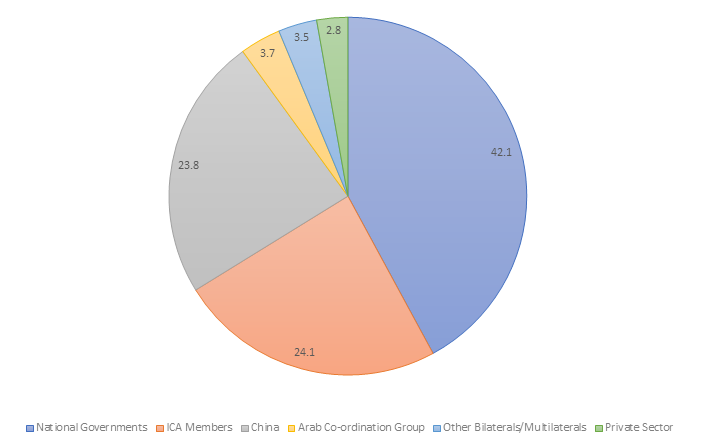 Africa’s infrastructure and the huge investments needed to close the gap are very much at risk from climate change. There is thus an urgent need to ensure that climate resilience is integrated into the planning and implementation of infrastructure investments on the continent.

Furthermore, major investments will have to come from the private sector, so there is growing demand for institutions to declare climate risk exposure of their investments. This presents a great opportunity for Africa.

As an infrastructure development latecomer, Africa can take advantage of advances in innovation, the falling costs of low-carbon technologies, and the need to diversify and strengthen the macroeconomic basis of economies. It can also learn from the experiences of other global regions in order to leapfrog and build infrastructure that is, from the outset, robust, resource-efficient, and able to perform both today and in tomorrow’s uncertain climate.

The ECA, the African Union Commission, the World Bank and the African Development Bank have teamed up to launch the Africa Climate Resilient Investment Facility—AFRI-RES, with initial funding from the Nordic Development Fund.

AFRI-RES aims to strengthen the capacity of African institutions and project developers to integrate climate resilience into the planning, design and implementation of investments in key sectors, particularly energy, water, transport and agriculture.

Transforming the economies of African countries to attain their development objectives requires widespread access to modern and sustainable infrastructure. A world-class infrastructure that crisscrosses the continent is going to be a key requirement for attaining an African renaissance.

This article is the third in a series of five articles on the impact of climate change on African economies published by BRINK and guest-edited by ACET, to mark Africa Climate Week. The writer, Linus Mofor is  Senior Environmental Affairs Officer at the African Climate Policy Centre.

ACET in the News 6
Covid-19 is changing the way African countries are collaborating with each other
ACET in the News 46
African Union’s landmark decision – Arkebe for UNIDO
ACET in the News 7
Edward Brown: “Growth with ‘DEPTH’ should guide economic transformation in Africa”
ACET in the News, Event News 6
ACET Senior Fellow discusses Digital Policies in Africa at FERDI webinar